In the mid-1960s business was booming in Dallas and it was transforming from a Texas town to a metropolis filled with new folks from all over the United States.  The city fathers might have attributed this growth to the oil and gas industry, Texas Instruments etc.  However, the invention of central air conditioning was really the key. Temple Shalom, literally Peace Temple, might as well have been the alternative meaning of Shalom, Temple HELLO, because of the number of Jewish newcomers to the area.

On October 20, 1965, an organizational meeting was held to start another Reform Jewish Congregation in Dallas. One of the attendees Ben Rosenthal offered “free office space and phone” to the new effort at his Building and Remodeling Company.  You can see his helpful pledge signed on the back of his business card, which someone had the forethought to save in the current extensive Temple Archives.  In December, Dr. Marvin Gerard and the newly appointed membership committee sent a note to the greater Jewish community to attend another organizational meeting. As you can see below, the come one, come all invite, so to speak, was not conveyed by rotary phone, or e-mail, or text. 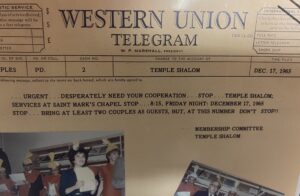 Shortly after this meeting, the newly appointed Temple Shalom President, Henry Jacobus Jr. welcomed the first group to worship together at The Chapel at St. Marks, led by lay leader Louis Cohen.   In November a founding document was proposed, approved and signed by seventy eight people.  And by December, the State of Texas granted a charter to the new congregation. That is a pretty remarkable time line that exemplifies the energy and vision of the founding members.

Thus began a journey for the new Temple Shalom Congregation.  Each week the tallest member in attendance would gently cover the cross in St. Marks before services began. For the High Holydays, Perkins Chapel at SMU provided space and more interfaith and institutional goodwill. Over time, other space was provided by Hockaday School, Ursuline Academy, St. Luke’s Episcopal Church and the Julius Schepps Jewish Community Center. Congregation Shearith Israel presented us with the gift of a Sefer Torah.   In 1966, we welcomed our first Rabbi, Hirshel Jaffe. We were now 112 families.

For several years, the Northaven Methodist Church, still on Preston Road, became our home for Friday night Shabbat Services.  On February 15, 1967 the now defunct Dallas Times Herald published a nice article with the somewhat peculiar headline, “Synagogue Told Stay Not Worn”. In a fine display of interfaith good will,  “Northaven Methodist Church has advised members of Temple Shalom , a two year old Reform Jewish Congregation to consider the Methodist property their home for the foreseeable future”…Rabbi Hershil Jaffe was concerned that the 160 members “were wearing out their welcome” .  Dr. James Hares, the Pastor advised Jaffe that they were welcome to stay until they had their own house of worship.  “Not every Methodist church is fortunate enough to serve also as a synagogue site and have “brotherhood week all year”.

Despite the hospitality of many, the pioneers of Temple Shalom longed for their own home. After all, the growth of the congregation required larger space for services, schooling, offices and activities. We purchased fourteen acres of land in July 1967 and broke ground in 1971.  An example of good ole fashioned late 1960’s kinship can be seen in the photo below.

Below are two maps of Judaic interest.  On the left are the wanderings of the freed Jews from Pharaoh’s’ Egypt in the Sinai Desert for forty years.  On the right are the wanderings of the Jews of Dallas for eight years before they moved into their new home in 1973, here at Hillcrest and Alpha.  Thanks to LBJ Freeway and the North Texas Tollway, they chose a site that is still easy to get to from Frisco, Plano and other areas that the founders likely referred to as “those fields”, “Oklahoma”, “Canada” or as we all might say “land I should have bought when it was inexpensive!” 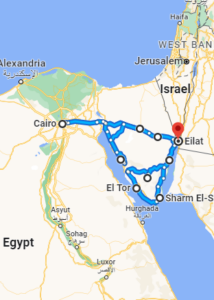 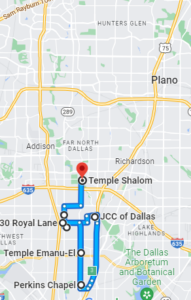 We would like to thank Marlene Fischer for her help identifying the people in these early photos. Also, thank you to Jori Kohleriter for drawing these sketches to aid in the identification. If you are able to identify any of the names missing, please email David Arndt. Thank you.