Bob Landers will facilitate discussions from the 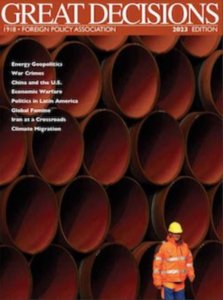 “Great Decisions Program 2023″ from the Foreign Policy Association. It is America’s largest discussion program on world affairs. The program model involves reading the Great Decisions Briefing Book, watching the DVD and meeting in a Discussion Group to discuss the most critical global issues facing America today.

2023 INFO
Each year, topics are chosen by a panel of experts. This year we will tackle the following eight topics:

Energy Geopolitics
How will changes in the energy industries impact relations between countries?
Access to oil and gas has long held an influence over the politics of individual nations and their relations with others. But as more countries move toward sustainable energy, and supply chain shortages affect the availability of oil and gas, how will this change the way in which the United States interacts with the outside world?

War Crimes
What is a war crime? How does this definition apply to recent events in Ukraine?
Russia’s invasion of Ukraine has resulted in widespread charges of war crimes and calls for justice. But what exactly are war crimes? Opinions of what constitutes a war crime have evolved, as have ways to identify and punish the perpetrators. How will the war crimes committed in Ukraine be dealt with?

China and the U.S.
How will the United States respond to China’s growing global presence?
For the past ten years, the United States and China have been locked in a competition for who has the greatest global influence. One major point of contention is the status of Taiwanese sovereignty, which has become even more relevant recently with the possibility that Russia’s invasion of Ukraine may prompt China to take similar action regarding Taiwan. How will the United States engage a China which is increasingly seeking to expand its sphere of influence?

Economic Warfare
What comprises economic warfare? How have these measures been used recently against Russia?
Waging economic warfare consists of a variety of measures from implementing sanctions to fomenting labor strikes. Such tools are utilized by states to hinder their enemies, and in the case of the United States have been used as far back as the early 19th century. Since Russia invaded Ukraine in February 2022, economic warfare has been the main means for the west to challenge Russia. How effective will these sanctions be at convincing Russia to cease its war?

Politics in Latin America
What does the emergence of various left-wing governments mean for countries in Latin America?
Electoral results in Latin America over the past four years have led many observers of the regional/political scene to discern a left-wing surge in the hemisphere, reminiscent of the so-called “Pink Tide” that swept the area some 20 years ago. But how much do these politicians actually have in common? What implication does their ascendency have for the region?

Global Famine
What causes famine? How can it be prevented in the future?
Fears of global food shortages have followed Russia’s invasion of Ukraine, which has disrupted grain shipments from the major grain producer. But what about countries and regions that were suffering before this impending shortage? How is famine defined, and how is it different from simple food shortages? What if any remedies are there?

Iran at a Crossroads
What is the future for relations between Iran and the U.S.?
By the fall of 2022, Iran was in a state of turmoil due to widespread protests against government-enforced wearing of the hijab, a failing economy, an ineffective new president, and the looming succession of the country’s leader, Ayatollah Khamenei. Abroad, renewal of the Iran nuclear deal seemed doubtful and tensions remain high between Iran, Israel, and Arab states. Many Iranians have lost hope of a better future, and the country seems at a crossroads. How should the United States deal with it?

Climate Migration
How is climate change impacting human migration?
As climate change accelerates and drought and rising sea levels become more common, millions of people in affected regions must uproot themselves and seek safety elsewhere. Who are these affected individuals, and how might the United States aid them, and be affected by the migration?

LOCATION: All sessions will be held in person at Temple Shalom in the Boardroom and via Zoom. After you register, in January you will be sent a Zoom link.

COST: The cost is $40 per person to cover the individual Briefing Books and other course expenses. The briefing books will be ordered by Temple Shalom and distributed to enrollees at the Temple on a specific date (time to be announced via email).